On a Radio 4 programme about Britishness, our PM listed tolerance, liberty and fairness. On all counts, our traffic control system - with its rabid parking controls, inconsistent bus lanes, proliferating traffic lights, totalitarian congestion charge - represents the polar opposite. Harmless conduct is criminalised in a system based on lethal priority rules which defy commonsense, abandon human values, and are enforced without discretion, compromise or compunction.

Debates rage around the world over the merits of naked streets, shared space, traffic calming, speed limits and bicycle lanes. Perhaps the Dutch have found the perfect solution. 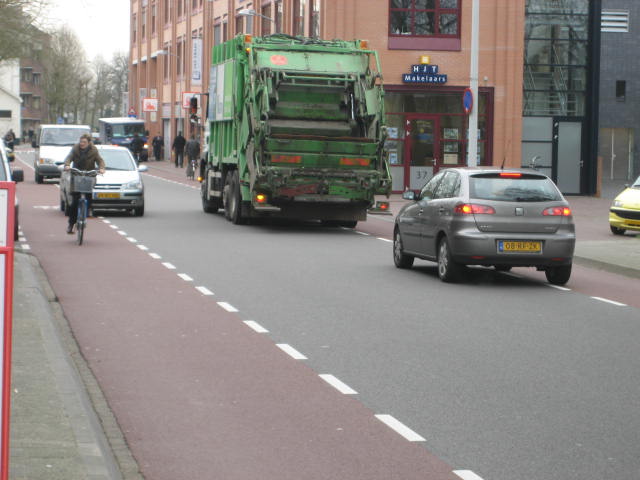 On the street in the picture, the central white line has gone, but on both sides are 1.75m wide red cycle lanes, with a dotted white line separating them from the main carriageway. This dotted line allows vehicles to enter the cycle lane in order to pass… Continue

One Show on 50mph limit

Weak report amounted to propaganda for the lower limit, especially a section with a councillor from Stockbridge (Yorks), who said average speed cameras had made an "accident"-prone stretch of road safe. There was no presentation of low-cost solutions involving intelligent re-design to encourage civilised conduct. Of course I agree with the need to reduce speeds at vulnerable points, but I question the high-cost, revenue-led standard solutions that are always promoted. Did anyone read that Boris Johnson got fed up recently by having to wait at red lights on a sunday? Is the a conversion? Can we use this in anyway. Have you spoken to him Martin?

Eminent Australian QC and judge, Marcus Einfeld, 69, lied over a speeding ticket and is now behind bars for a minimum of two years. Snapped at 36 in a 30 limit, he was concerned about points on his licence. OK, in a sense he is the architect of his own downfall, and as Clive James said, his fall from grace is tragic in the pure sense, but to me it's an example of Lilliputian law bringing about the pointless demise of Gulliver. The news story is… Continue

In A Pattern of Islands, which we read at school, a canoe capsizes about a mile offshore in the South Seas. The two occupants, treading water, find themselves surrounded by sharks. One panics and is mincemeat. The other keeps his cool and swims towards the ring of sharks. They part and let him go. That literary experience served me when I was out one day walking my border terrier (I was about 12). Suddenly, four barking, snarling Alsatians came running at us through a farm gate.… Continue

My main beef with the London congestion charge is that it was imposed before deregulation was even tried, so in my view it is grossly premature. Operationally it's odious too, but that's another matter. Cambridge is plagued by measures which obstruct flow, e.g. a bollard for non-existent pedestrians which turns two lanes into one and causes a permanent mile-long tailback (Coldham's Lane). When I challenged a councillor about this and other examples where simple improvements could ease… Continue

When it comes to raising the price of alcohol, the government expresses even-handedness: "We don't want to punish the majority for the sins of the irresponsible minority." Why, then, do we have to suffer lowest-common-denominator, one-size-fits-all regulation on the road?

Boris Johnson’s claim that the all-electric Tesla he borrowed represents clean motoring is rebutted by Oliver Marre in today’s Observer. According to the Carbon Trust, grid electricity releases 0.537kg of CO2 per kw/hour compared with 0.25 from diesel and 0.24 from petrol.

Are traffic controls good for us?

Ask a silly question. Here's a fairly serious answer. There is overwhelming evidence that if children are badly treated when young, they not only suffer emotional damage but physical brain damage. Conversely, a nurturing upbringing produces beneficial brain chemistry (Oliver James writes about this in today's Guardian.) The neuropeptide oxytocin is the stuff we want. The stuff we don’t want is cortisol. The traffic control system as currently misconceived generates conflict and stress,… Continue

An argument for the 50mph limit

See Ross Clark's stimulating Times article here. But like most commentators, he misses the point which Kenneth Todd made years ago and I keep hammering home: it's the rules of the road which turn roads into rivers of death. Restore equal rights and responsibilities, with no priority at junctions, and people will drive according to the context. If the road is clear, they can speed up. If they… Continue

Bandwagon gathering speed (some not on it)

The Standard ran this about traffic lights by Andrew Gilligan. He quotes me without a name check (maybe the subs cut it). They published my comment, but removed my reference to FiT Roads.

Another town on the bandwagon

A good friend of mine live in Staines, where I sometimes stay. Many a time we have poured verbal bile on the moronic system of traffic lights. Funny the way they catch up. Shared space for Staines

There’s a four-letter word to describe FiT philosophy. K-I-N-D. Filter in turn allows people to be kind to each other. Main road priority, which forms the foundation of the current system, encourages the opposite. If you want to be kind and give way to a fellow road-user who was there first, you will be seen by the vehicles behind you as in breach of the rules, which say you should only slow down or stop for a red light or an obstruction. Slow down for someone trying to cross from a side road,… Continue

Ian has flagged up a couple of relevant articles, this one about distracting signage, and (shock horror!) this one about a new national 50mph speed limit to be enforced by average speed cameras. The assault on discretion, commonsense and individual responsibility gathers force. For Ian's (different) view, see Forum.

The corrosive effect of regulation, by Jenni Russell, Guardian Comment, 4 Feb 2009.
Recommended by Angelica. Some quality readers' comments too. Here

Roundabouts are OK, but they still have the problem of directional priority, which at peak times can produce unbroken streams of traffic on the main flow and a "need" for lights (to interrupt those streams and enable others to enter). It also means people who arrived earlier have to wait for people who arrive later. Why should they? Could filter in turn (FiT), aka the all-way yield, be the best of all worlds?

There's a piece about the Ashford shared space scheme here (back tab to return) ... Is it inevitable that a news report will always feature doubters and detractors? Also they don't address blind people's concerns about shared surfaces. It's only a mini-report, but even so ...